I have dusted off my sewing machine, dragged out the trimmings box, and thrown on my seamstress persona for the re-emergence of the Bedroom Secrets collection 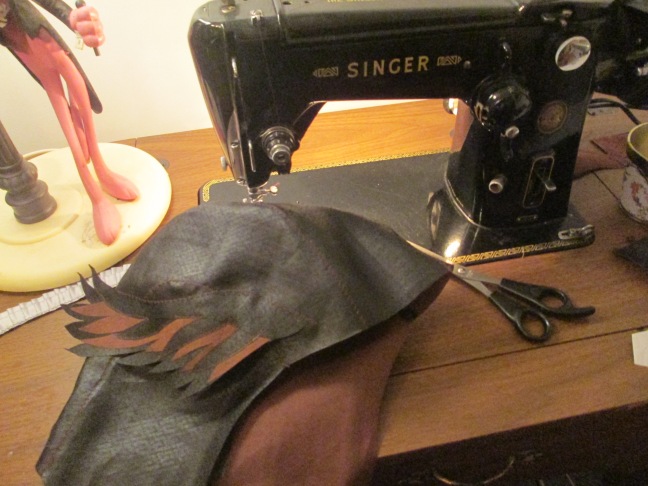 I originally produced this collection in 2011, I was very sick at the time and making it pulled me through some dark days. Strangely enough it is one of the most complicated patterning achievements of my time, which was pretty impressive considering what I was going through. Medicating hard, and suffering from severe Herxiemer reactions daily, I desperately needed a project to help me cope. The collection is a culmination of years of visionary ideas inspired by female warriors. Images of Joan of Arc in her armor gave way to developing and subverting the typical female iconography. I wanted to see a woman in a helmet that was wearable and warrior.

I loved the imagery associated with women in armor, it had been the basis of my design drive since I studied fashion back in the 1990’s. Everything I had designed was in some way inspired by my first image of Joan of Arc, what an amazing woman, fierce though she was.

I watched my early design ideas appear to turn into a movement which could be loosely termed ‘Steampunk’, which still enjoys a healthy following internationally, and decided it was about time I followed suit, it never paid to be ahead of my time. It was time for me to merge instead of pioneer, something I never found easy to do.

The collection developed into a delightful compilation of masks, helmets and decoupage adornments, trimmed with the luxurious tassels and satin trimmings I had collated over the years, and mostly constructed from exquisite parchment silk which I had purchased in bulk many years ago and held onto as my most prized possession. This silk I have never seen anywhere else since, it cost me everything I had back when I took a Princes Trust loan out in my late 20’s. It looks like fine leather, and wears like leather too, quickly revealing a rich scratchy patina due to its black finish on brown weave. I am glad I held onto it, it is one of the most valuable things I own. It was high time I turned these treasures into a wearable art form. Now it is time to start building up some stock, developing the collection even further (as is the way with a creative like myself, we cant stop).

This collection will be revealed for the first time at the Art Bizarre Pop-up Shoppe in Boscombe, Bournemouth in Dorset. The shoppe is a co-production between myself, and Ben Irwin

in association with Claire Belmont from The Great Exhibition

‘come escape the banal and retire to our cavern of curiosities and be seduced by our hospitality, mince pies and mulled wine tombola.’

I will be there with my sewing machine, finishing my creations before your very eyes…there will be live art workshops and curiosities from a plethora of local craftsmen and woman.

Drop in, your most welcome. 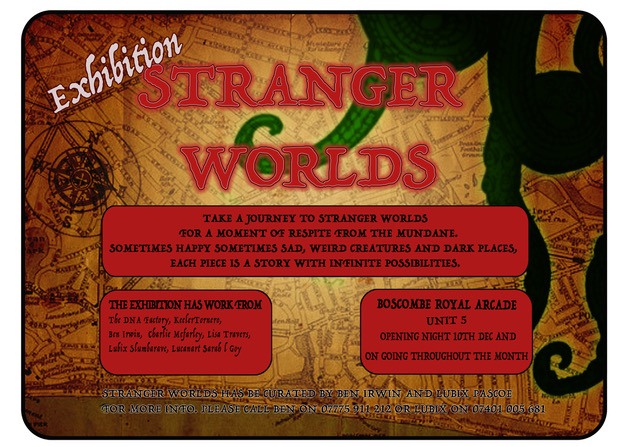 I am with baited breath, anticipating the excitement and creative satisfaction of co-producing an exhibition with artist Ben Irwin, in my home town of Boscombe, in Dorset. So far we have curated several artists from London and local to Dorset, chosen for their style of work and its reference to our theme, Stranger Worlds;

‘In the crazy world we live in, Art and Artist have always been a constant, creating their own interpretation of the world they live in; a snap shot of a moment.
Whether the inspiration took less than a second or a life time to decipher, a story was told.
The stories told here are indeed Strange and Bizarre they take you on a journey for a moment of respite to the mundane.
Sometimes happy, sometimes sad, weird creatures and dark places, each piece is a story with infinite possibilities.

The exhibition Stranger Worlds is curated by Ben Irwin and Lubix Slumbarave. Opening night on 10th Dec and has work from:

This is a text widget. The Text Widget allows you to add text or HTML to your sidebar. You can use a text widget to display text, links, images, HTML, or a combination of these. Edit them in the Widget section of the Customizer.

This is a text widget. The Text Widget allows you to add text or HTML to your sidebar. You can use a text widget to display text, links, images, HTML, or a combination of these. Edit them in the Widget section of the Customizer.